Canadian National Railway (CN) reached Rosetown in 1910 and a few years later the Canadian Pacific Railway (CP) ran a track just north of town. Both CP and CN still have rail lines crossing through Rosetown. The CP Kerrobert+Rosetown spur, running east to west, is on a three-year plan of abandonment by the CP Railway. The section of the spur to be abandoned is an 82.9 kilometres stretch of railroad from Herschel to Conquest. CN Rosetown Subdivision runs north to south through Rosetown stopping at two grain elevators in Rosetown. The Cargill Elevator holds a capacity of 13,500 tonnes and 41 car spots while the Saskatchewan Wheat Pool has a capacity of 6,570 tons and 12 car spots.

The Rosetown Airport owned by Provincial Airways, has a variety of services for a small rural airport. The airport includes an asphalt runway 2,500 ft long and 75 ft wide, runway lights to guide incoming aircrafts and a tarmac to accommodate approximately 5 to 6 planes at one time. The Municipal Airport can accommodate small aircrafts such as aerial sprayer planes, small business planes and applicator planes. Facilities include a recently established airport terminal with a public waiting area, an aircraft personnel/staff lounge, washrooms and telephone access. There are 7 hangers and a refueling station at the airport. West Central Air and Maintenance has two certified aircraft maintenance engineers with the ability to work on any commercial plane. West Central Air has also expanded the business to include aerial photography. West Central Air and the Town of Rosetown are working on further airport developments including flights from Rosetown to Fort McMurray and an extended airport runway. For more information on the airport contact West Central Air at 306-882-3830. 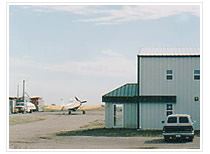 Being at the crossroads of two major highways provides an advantage for courier services. Services is offered by Purolator, DHL and several others.